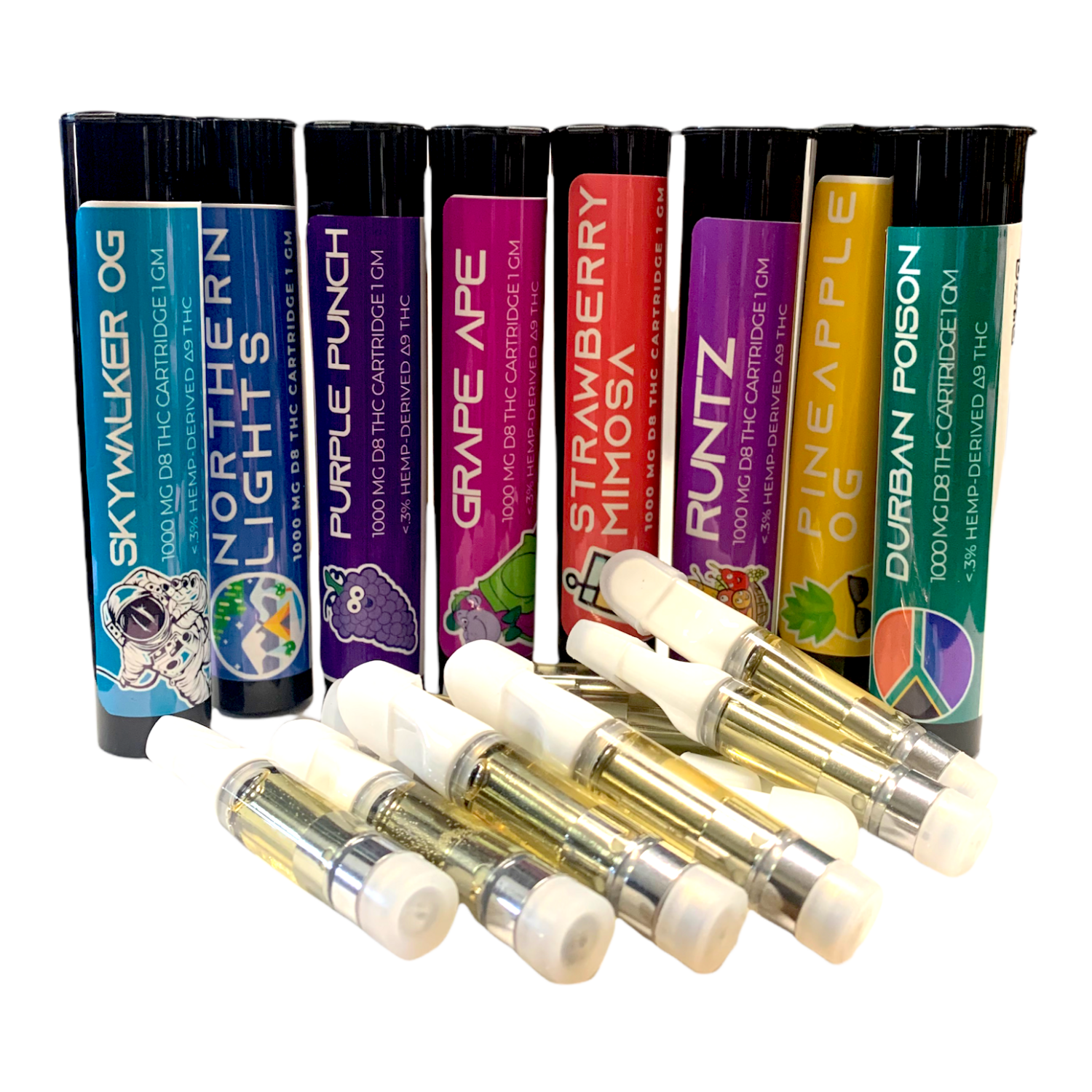 Weighing in at 1000MG Delta-8 THC per cartridge, our terpene-infused D8 carts have quickly become known as the strongest in the Rio Grande Valley. We craft our D8 cartridges in a variety of strains for you to choose from.

Blue Razz
Indica dominant hybrid
Blue Razz traces its origins to an unknown American breeder. While little information exists about its parent plants, Blue Razz is commonly enjoyed in vapes as an Indica-leaning hybrid. Consumers report this strain features a sweet berry taste and skunky aroma, while others cite its pain-relieving and relaxing properties

Skywalker OG
Indica dominant hybrid
A dank and potent strain, Skywalker OG offers a super relaxed high with a nice blend of hybrid effects. An indica-dominant beauty that weighs in at 85/15, it's the lovechild of Skywalker and OG Kush. Like its namesake, it will bring strong kush attributes and leave you feeling like you're in the clouds for hours.

Durban Poison
Sativa
This pure sativa originates from the South African port city of Durban. It has gained popularity worldwide for its sweet smell and energetic, uplifting effects. Durban Poison is the perfect strain to help you stay productive through a busy day, when exploring the outdoors, or to lend a spark of creativity.

Grape Ape
Indica dominant hybrid
Grape Ape is the product of strains as different as Mendocino Purps, an award-winning Northern California crossbreed, the influential staple strain Skunk, and a legendary Afghani landrace. The combination of these nuances has yielded a bold and visually striking variety.

Gelato Cake
Indica
Gelato Cake is a potent Indica-dominant hybrid strain made by crossing the creamy berry of Gelato #33 and the vanilla frosting of Wedding Cake. Part of the Cookie strain family, Gelato Cake is very popular across North America and beyond.

Northern Lights
Indica
Northern Lights, also known as "NL," is an Indica marijuana strain made by crossing Afghani with Thai. Northern Lights produces euphoric effects that settle in firmly throughout the body, relaxing muscles and easing the mind.

Pineapple Kush
Sativa
Pineapple Kush is a Hybrid strain made by crossing Pineapple with Master Kush. Pineapple Kush produces cerebral effects accompanied by a light body sensation. The flavor of this strain has been described as a subtle and sweet pineapple taste with minty undertones.

Blueberry Donut
Indica
An Indica dominant strain made by crossing Purple Thai with Thai. The sweet flavors of fresh blueberries combine with relaxing effects to produce a long-lasting sense of euphoria.

Save this product for later
Display prices in: USD